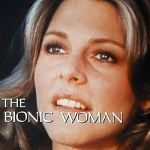 Sorry for the delay in this post, but I was making changes in the appearance of my blog.

The Bionic Woman is an American television series starring Lindsay Wagner that aired for three seasons between 1976 and 1978 as a spin off from The Six Million Dollar Man. Wagner stars as tennis pro Jaime Sommers who is nearly killed in a skydiving accident. Her life is saved using “bionic” surgical implants similar to those of The Six Million Dollar Man. As the result of Jaime’s bionics, she has amplified hearing in her right ear, a greatly strengthened right arm, and stronger and enhanced legs which enable her to run at speeds exceeding 60 miles per hour.

Well, I’m not The Bionic Woman, but part of me went bionic on May 9 when I had a total hip replacement of my right hip. It’s kind of surprising for a woman who recently turned 59, had been a group fitness instructor for 28 years, works full-time, and leads a very active life with her husband. Frankly, I was shocked! Here’s the backstory.

In December 2012, I had a robotic-assisted hysterectomy to remove painful endometriosis. It was a very successful surgery….we thought. However, when I returned to work a month later, I began to experience pain in my right lower back and pelvic area. No, it can’t be…..it should be all gone.

After several examinations by the doctor, seeing my chiropractor (who noticed I had a limited range of motion in my right hip), and getting xrays and an MRI from a hip orthopedic doctor, I found out I had some arthritis, an arthritic cyst, and some bursitis in my right hip. After several hip injections with little pain relief, I went to a pain control doctor, who gave me several steroid injections in my spine, as I have degenerative discs in my lower back. Still, no relief.

Eventually, I was able to plead my case with the gynecologist that endometriosis was still present. He did some research and was hesitant, but he trusted that I knew my body. On August 19, I had a laparascopy and two small spots of endometriosis were found embedded in deep tissue and sitting on nerves, which was causing the intense pain. Whew…I was right and now the pain is gone. Woo! Hoo! Thank you, God, for the perseverance and the trust and skilled hands of my gynecologist.

I recovered from that surgery well, but a nagging pain lingered between my right hip and back. Back to the chiropractor and physical therapist I went. PT did not bring pain relief or improved range of motion, so my PT recommended I see a doctor who does hip arthroscopy, as he might be able to open the hip, and fix what is wrong. Surgery…really?

After having a pain injection and MRI with the hip arthroscopic doctor, he stated that my hip was too deteriorated to correct with arthroscopy, and he wanted me to see the hip replacement surgeon in their practice. It is now December and both the hip replacement surgeon there and the original hip surgeon in my city agreed I’m not ready for a hip replacement, that it might be my back, and I should go back to the pain control doctor to see if injections might bring pain relief. Oh, you’ve got to be kidding me! I’m running around in circles here, God. Please direct my path.

Mid-January through March, I had several injections from the pain control doctor that brought limited and temporary relief. He sent me for nerve conduction studies, which are all normal. I also found out in January that my Lyme disease had returned. Ugh…can’t be. How much more, God?

I returned to my PT, who recommended I purchase a cane as my gait was really uneven. If I would have had a cane in my hand, I would have probably hit him with it! A cane? At my age?

So I decided if I’m going to carry a cane, I would go in style, so I purchased a fold-up cane called “Glow ‘N Go” where the handle and tip glow in the dark:-) Fun! And it was quite a conversation piece:-)

After a few weeks of therapy, my PT recommended I go back to the surgeon as my hip was not improving. I did that and told the doctor I had done injections for my back and was doing PT, but the hip was getting worse. He did a standing hip xray, and when he pulled it up on the computer, he turned to me and said, “Well, I now can do a hip replacement.” (He doesn’t mince words.)

I was shocked and asked, “What happened in the last 3 months?” He put the xrays side by side. The one from December had cartilage and the one he took that day had none. I was bone-on-bone in my right hip joint.

Startled, I asked, “Isn’t that unusual?”

He said, “Everyone deteriorates at a different rates, but the end result is the same–the hip needs to be replaced. Now, let’s get a date on my calendar.” Oh, I can’t believe we’ve actually come to this point. It’s all moving so fast.

After doing some research, getting a second opinion from the hip ortho doc in my city, and getting questions answered from the surgeon, I made arrangements to be out of work for at least six weeks and for my husband to be with me the first week after surgery. Before the surgery, I had one lingering question that no one had been able to answer….

Without hesitation, he said, “Absolutely. Yes. Lyme disease can affect the skin, brain, nervous system, muscles, bones, and cartilage. After my own knee quickly deteriorated and I had a knee replacement, I surveyed my patients and researched Lyme disease studies. The research indicates that infectious spirochetes [the tightly coiled bacteria that causes Lyme symptoms] can remain adjacent to or embedded in cartilage for extended periods,even after antibiotic treatment. Also spirochetes love hiding in cartilage because it’s one of the immune system’s weak spots.” Ok, great…I had to ask, didn’t I?

Well, I had an answer, but it was another ugly surprise about this disease called Lyme. I am recovering very well from the hip replacement surgery, and my strength is coming back quickly because I had a newer procedure called the direct anterior hip approach, which doesn’t cut any muscle. More about that in a future blog.

There are days my recovery has been slowed or halted because of overall muscle and body aches from Lyme, but I am now walking with that flashy “Glow ‘N Go” cane again and have already put that walker you see in the picture away.

Something I read in a Karen Kingsbury novel while I was recovering has stuck with me. One of the characters in the book had just had a delicate surgery, and another character asked the doctor, “What if it doesn’t take?”

The doctor replied, “Oh, it’ll take. In fact, the area where there was trauma, replacement, and healing will actually be stronger than the unaffected parts of his body.” I thought about how amazing God is that He gives this skill and wisdom to doctors, and that He designed our bodies to heal even stronger. Where there was trauma and eventually healing, that section would be stronger than any other.

And so it is in our marriages, our families, our work, and our relationships. Trauma will come to many relationships. Disagreements, differences, arguments….sometimes acute or chronic pain. God knew we’d need some surgery, so He gave us His Word full of advice on how to make points of trauma, places of healing. And come out stronger because of our obedience and His Grace.

3 thoughts on “The Bionic Woman”

Translate Into Your Language

Read Between The Lyme

M.E. myself and I

By Anna Redshaw, creator of 'Blue Sunday' the Tea Party For M.E.

A place for teen girls to find Hope and Light ♥️

Writing About Books, Boys, and Bodies (Living With an Invisible Disability)

Reflections on living a life of faith.

Making it Through the Rain

ramblings of a crazy lady living with MS